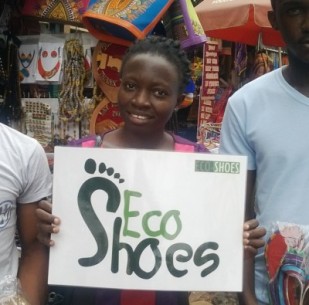 Mabel Suglo was born in Jirapa in the West Region of Ghana on the 24th of September 1993 to Mr. Gaspard Suglo and Madam Mary Adolee. Mabel is the last born of three girls. Mabel’s mother and her late grandmother were inspirations to her early in life. They taught her to love humanity, be generous to all she met in life, and especially to show caring and kindness to those that are vulnerable, due to the additional challenges they face. Mabel’s grandmother was a shining example of how someone who was disabled, though great courage and strength, was able to farm and be self-sufficient.

Mabel completed her basic and, in 2009, her junior high school education in Lawra in Ghana’s Upper West Region. In 2010, Ms. Suglo received a Presidential Award at the State House in Accra for having the highest scores on her basic school certificate examination for the entire Upper West Region. She attended the Angel Educational Complex in Kumasi for a year of her senior high school education before transferring to Ghanata Senior High School during the 2010 to 2011 academic year.

Ms. Suglo had a big year in 2013; she not only graduated from Ghanata, but also co-founded the Eco-Shoes Project and began her studies in Health Science Education at the University for Development Studies in Tamale. The Eco-Shoes Project is an initiative that assists artisans with disabilities to create fashionable, comfortable, Afro-themed shoes and accessories from discarded tires and waste materials including recycled cloth. Ms. Suglo’s initiative is not only improving Ghana’s environmental health, but also employs five people. Ms. Suglo is also helping to change perceptions of disabled people who all too often are discarded by their families and society as burdens not capable of making contributions to society. In many ways, her business model is like that of the impressive social entrepreneur and founder of soleRebels footwear, Bethlehem Alemu of Ethiopia, who also intentionally employs those that might not otherwise be hired.

Ms. Suglo provides mentoring on product development and financial and business literacy to her employees to considerable success. In 2013 Eco-Shoes Project produced 500 pairs of shoes. Due to demand for the beautiful shoes, by 2014, the number had risen to 1,500 pairs. Although it is called the Eco-Shoes Project, in late 2015, handbags were added as a new product. Ms. Suglo anticipates that the artisans will produce 1,000 to 1,500 handbags per year in addition to the shoes that are being made. It was her good work with the Eco-Shoes Project that made her the second runner up for a 2015 Anzisha Prize and the recipient of $12,500. The prestigious Anzisha Prize is awarded through the African Leadership Academy in South Africa and the MasterCard Foundation. Ms. Suglo plans to use the prize money to purchase better machinery to enhance productivity at the Eco-Shoes Project. She also would like to invest in the creation of an e-commerce site and additional training for her employees, including computer-aided shoe design. Ms. Suglo anticipates graduating with her Bachelor’s in Health Science Education in 2017.

Based on the literature on international development and personal success, why has Ms. Mabel Suglo been so successful in her undertakings?

Mabel Suglo puts her good ideas into action so that they can make a positive difference in the lives of others. She understands that DISABILITY IS NOT INABILITY. Ms. Suglo employs people with a range of disabilities who create high quality products that can be sold into wholesale and retail markets.

Ms. Suglo is LIKABLE; she was easily able to recruit employees when she approached them with dignity and respect and asked if they were willing to try something new if it paid more than what they currently earned. On November 16, 2015, Ms. Suglo won the People’s Choice Award which is granted by the Anzisha Team.