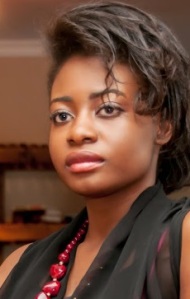 Stella Mutale Sata was born on Valentine’s Day in Lusaka, Zambia in 1994. She is the daughter of His Excellency Mr. Michael Chilufya Sata, who served as the fifth President of Zambia from September 2011 until his death at the age of 77 in October 2014. Ms. Sata had lost her mother, Dr. Matildah Macarius Mutale, only three months earlier.

Ms. Sata believes that whatever a person’s background, they can go on to achieve great things and inspire others. Her father grew up in a poorer family and didn’t own a pair of shoes until he was 21, yet he was able to achieve the highest office in the land. Her mother came from greater means, but as the fourth born in a family of eleven children, she educated all of her younger siblings and even some of their children. Each of her parents had great resolve and drive.

Although orphaned at an early age, Ms. Sata has made the most of life and has made effort to give back to others less fortunate than her. Ms. Sata is something of a child prodigy. Stella’s grandmother taught her to read the Bemba language when she only 8 years old, which made her the youngest in her church reading in the adults’ local language. In 2007, she completed her secondary school (high school) education at the age of 13. At the age of 14, she enrolled in a Diploma in Business Administration course at Nilai University in Malaysia, and after she graduated she went on to pursue her Bachelor of Arts (with Honors) in Accounting and Finance from Oxford Brookes University. She attained this at the age of 18.

In October 2012, one month after completing her Bachelor of Arts degree, Ms. Sata started her own events management company, SSR Events. In 2014, at the age of 21 she graduated with distinction from the University of South Wales with a Master’s Degree in Management and Development of International Financial Systems. She has been selected by the University of Cambridge as one of the Queen’s Young Leaders Mentors, which recognizes exceptional people aged 18 to 29. Ms. Sata is currently a post graduate student in Business and Management at Walden University, which is based in Minnesota in the USA, but offers degrees through online coursework.

Ms. Sata believes that the world would be a very different place if its people were truly educated, not just with formal degrees, but in terms of learning about and appreciating other people and cultures. Some of her most rewarding experiences in life have been participating in international meetings, including those of the Model United Nations and the International Youth Leadership Conference. These gatherings focused on the kind of world we can all live in if we are united.

When Ms. Sata began giving formally, she helped raise funds for orphanages in Zambia and Malaysia. She also helped lead a 30-hour Famine Camp through the non-profit organization WorldVision. In time, Ms. Sata realized that donating food, money, or clothing was not the most effective way to give. She no longer focuses on gifts and donations, but on community growth and self-sustainability.

To supplement what Opportunity Desk offered Ms. Sata started writing about “Stella People” on her Facebook pages. Stella People was the first stage of the Stella Project that Ms. Sata created in May 2014. The Stella Project seeks to inspire future change-makers. It actively searches for people that are making a positive difference and showcases their good work. It is especially interested in featuring young leaders (under the age of 40) from rural and other excluded communities that might otherwise remain in obscurity due to infrastructural hurdles, including a lack of internet access. After her mother died, Stella took a break from The Stella Project.

When she was ready to get back to The Stella Project she partnered with Nelson David Bassey, a Nigerian student studying in Malaysia and the two went back to the drawing board to re-brand and re-strategize on The Stella Project. Their first order of business was to register the organization as a Limited Company by Guarantee which makes it a Not for Profit legal entity.

When Nelson and Stella discussed what cause they would want to champion, they decided education and leadership was at the top of their priorities, being well educated leaders themselves. The Stella Project, is now bound by the commitment to launch and support education and leadership projects by entrepreneurial and passionate young Africans. It seeks to empower children and youths to play an active role in their socio-economic development.

The Stella Project has two pipeline projects for the year 2016 – The Solar Powered Internet School initiative curated by Stella and the Educate Future Authors Project curated by David. The Solar Powered Internet School initiative endeavors to bring Information Computer Technology and Education to a marginalized community through a mobile school with the support of IntelCab. The Educate Future Authors project’s mission is to reduce illiteracy by helping children and youth to learn how to read and write.

Ms. Sata seeks to create employment and encourage sustainable entrepreneurship. Although she attracted some negative press in late March with her comments about student protesters that some viewed as elitist, Ms. Sata stands by the points she made about the need for young people to be entrepreneurial. She has apologized for the manner in which she delivered her comments and has supporters who recognize that Ms. Sata was merely pointing out that if formal employment is not an immediate option for graduates, they need not despair, if they have imagination and a strong work ethic, they may still succeed and even become wealthy.

Ms. Sata aims to create partnerships across Africa and has started to do so. Two early Stella Project partnerships are with Reach a Hand Uganda and Le ProjetEcoute in Guinea. Ms. Sata chose Guinea as the pilot West African country because unlike Nigeria, Senegal, and Ghana, it does not have many well-known and well-documented change makers. The Stella Project also has partnered to launch the “Educ8 Future Sculptors’ Project,” an initiative that enables young artists, often street children, to earn some income while learning how to sculpt from a Zambian master sculptor. Ms. Sata wants to support people and help inspire and build the next generation of leaders, one Stella Project at a time.

Based on the literature on international development and personal success, why has Ms. Stella Sata and the Stella Project been so successful?

Ms. Sata is devoted to ASSISTING OTHERS. She has done so not only through WorldVision and the Stella Project, but also as a consultant for the deVere Group Zambia, through which she promotes saving and investing for a secure future for individuals and families.

Ms. Sata has surrounded herself with LIKE-MINDED SUPPORTERS. She is a planner, who encourages others to develop flexible 10-year plans for their lives to achieve the most that they can. She DRAWS INSPIRATION from the successes of others, including Ashoka founder Bill Drayton and Nobel Prize winning economist and micro-finance supporter, Muhamad Yunus.