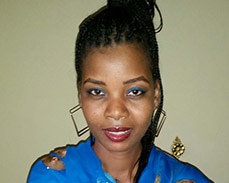 Amalkher Djibrine Souleymane was born in N’Djamena in August 1991. She began primary school in Bol, a town located near Lake Chad. Her family moved east to the town of Biltine when she was four years old, where Amalkher started her education and became the first child to be registered at a small library in the town.

At the age of 12, Ms. Souleymane moved to Chad’s capital city of N’Djamena with her family. It was while in secondary school that Ms. Souleymane discovered that she had a passion for volunteer work. Although volunteering wasn’t a common practice in the city, Ms. Souleymane had the support of her family, friends, and colleagues. She became a member of the board of her school’s association through which she helped to organize a Brain Bee competition through which students answer questions about neuro-science, the brain, and discover the importance of competition as young people.

In 2009, Ms. Souleymane completed her secondary school education at the Ecole privée Spoir de Farcha in N’Djamena, she then went to “Ecole source de Progrés” where she obtained her baccalauréat in Série scientifique, a set of courses that prepares students for work in scientific fields including medicine, engineering, and the natural sciences. Ms. Souleymane’s dream was to be an architectural engineer, but there was no school with an appropriate program in her area so she co-founded a company, Comgec, instead.

Comgec provides a range of services including general trade, building and green spaces, electricity, and car rentals. Getting a new company started was a challenge and Ms. Souleymane realized that it would be helpful if she had some additional skills. She decided to return to school at the Institut Superieur de Commerce d’Administration des Affaires et de management (ISCAM) while still running her company.

Beginning in 2010, Ms. Souleymane took on a role at ISCAM similar to what she did at her secondary school, she became a member of ISCAM’s association and served as an intermediary between Institute staff and the student body. Ms. Souleymane also has been serving as the contact person for her country for the International Association for Volunteer Effort (IAVE).

By 2012, Ms. Souleymane was working more broadly to strengthen Chadian civil society organizations. She put together some volunteer teams that worked hard to collect information from youth-led organizations and other non-profit organizations to understand how the organizations were working. What she and the other volunteers learned was that there was a lot of work to be done, especially among the youths. Young people needed to be sensitized about voluntary work in general and non-profit work in particular. To achieve this aim Ms. Souleymane co-founded an organization called Collective des Associations pour la citoyenneté et la sauvegarde des Acquis Democratique au Tchad. The organization’s main goal is to train and motivate other youth-led organizations to improve their operations and to think big.

Ms. Souleymane obtained her Bachelor’s Degree in Accounting Expertise from ISCAM in 2013 and her Master’s in Project Management in 2014, also from ISCAM. In 2014, in an effort to further realize her dream of creating a platform that brings together African youths to share ideas and find solutions to socials problems including poverty, insecurity, and bad governance, Ms. Souleymane founded an initiative called Nirvana, for which she serves as President. Nirvana aims to empower women and youths in Africa. The initiative is already underway in four countries, Chad, Cameroon, Senegal and the Central African Republic (CAR), but it is still growing, and Nirvana is also getting started in Malawi and the Democratic Republic of the Congo (DRC).

In recognition of her good work, Ms. Souleymane was selected as one of four young people from her country to receive a 2015 Mandela Washington Fellowship for Young African Leaders. The program was created by President Barack Obama and operates through his Young African Leaders Initiative (YALI). It supports six-weeks of academic training at a host university in the USA. Ms. Souleymane completed the Civic Leadership program at Tulane University in New Orleans before heading to Washington, DC with 499 other young African leaders to partake in a Presidential Summit with President Obama. The Summit was empowering in that it gave Ms. Souleymane and the other young leaders not only the opportunity to network, but also to hear President Obama speak about how he believed in them. His words of support and encouragement meant a lot to the group. Ms. Souleymane is one of the youngest businesswomen in Chad.

Based on the literature on international development and personal success, why has Ms. Amalkher “Mami” Djibrine Souleymane been so successful in her undertakings?

Ms. Souleymane sees the BIG PICTURE. She thinks not only of those in her family and community, but also those in her country and across Africa. As the founder and President of Nirvana, contact person for IAVE for Chad, National Coordinator of the First Forum on Internet Governance in Chad, and President of the Women’s International League for Peace and Freedom (WILPF) in Chad, she is working at the national level and beyond.

Ms. Souleymane believes that each person can be a leader and although leadership often requires sacrifice, and more sacrifice, the best life each of us can live is in service to others. We should all think about what we can do to bring about positive change in our communities. Leaders do not look for something in return for their service. They simply leave a legacy that can serve as an INSPIRATION to others.