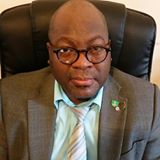 Morris “Lordmore Karanda” Kakunguwo was born in 1972 in Mt. Darwin, around 200 kilometers (124 miles) north of Zimbabwe’s capital city of Harare. He was the youngest of seven children. Morris’ father, Frank Kakunguwo, the Pastor of a mission school, was shot to death during Zimbabwe’s War of Liberation when Morris was only two years old. Nonetheless, Morris was able to shine at a young age because he was a skilled football (soccer) player who was passionate about the sport. Argentinian footballer and coach Diego Maradona, who many regard as the greatest footballer of all time, and Zimbabwean footballer and coach Moses Chunga, were Morris’ idols.

Morris also looked up to his older brother who played for the Karoi United Football Club, in the late 1970s. He also was inspired by his teacher Mr. Chimudzi who gave Morris his first opportunity to play football on a team at Chironga Primary School in Mt Darwin. As a youth Morris played street football before becoming a midfielder for school teams and Zupco and Social Club Chitungwiza, in Harare. Sometimes his brothers took him to stadiums see Zimbabwe’s best teams play football matches, which was a real treat.

Thanks to the financial support of three of his siblings, Mr. Kakunguwo attended two Harare schools (Seke 3 High School in 1986 and Churchill Boys High in 1987) before transferring to a boarding school 105 km (65 miles) south of Harare, Ngezi High School, Mhondoro, which he attended from 1988 to 1989, when his mother passed away. Mr. Kakunguwo succeeded in obtaining his Ordinary Level (O-Level) Certificate, but realized that he needed to push on through life on his own. His brothers had their own families and would not be able to continue to offer financial support.

After high school, Mr. Kakunguwo turned to coaching the Blue Pools in Mt. Darwin in the 1990s where he remains a sponsor and life President of the village team. Mr. Kakunguwo hoped to become a footballer himself, but a knee injury kept him from being able to follow through on an offer in 1993 to play for the Harare-based team, the Dynamos.

Given his injury and football no longer appearing to be a realistic option, in 1993 Mr. Kakunguwo took a job as a bus cleaner for Zupco Bus Company. He was promoted to recovery driver, bus driver, and driver instructor, but wanted a future in nursing. In Zimbabwe, Mr. Kakunguwo did not qualify for admission to university due to not having completed his Advanced Levels (A-Levels), but Mr. Kakunguwo had heard that in the UK, where his niece was living, O-Levels were enough to enroll in a university.

Upon migrating to the UK in 2001, Mr. Kakunguwo returned to his love of football as he prepared for university. He took online coaching classes through the English Football Association and enrolled in a one year Business Management course at the Business and Computing College in London. In 2002, Mr. Kakunguwo began his studies in nursing at the University of West London, which was then called Thames Valley University. He obtained his Higher Education Diploma in 2005.

Zimbabwe’s failure to qualify for the 2014 World Cup inspired Mr. Kakunguwo to begin the process of establishing a football academy in Harare to provide coaching to 5 to 16 year olds. Mr. Kakunguwo recruited coaches and players for his academy from the UK and has created a popular Facebook page for it. Mr. Kakunguwo’s dream is to follow the Spanish model in which football is supported at all schools in the country such that Zimbabwe might one day qualify for the World Cup, as it came close to doing in 1998 under Reinhard Fabisch’s coaching and Peter Ndlovu serving as captain, before the team was ousted by Egypt’s team.

Football has grown to be a bigger and bigger part of Mr. Kakunguwo’s life. In a June 2015 interview with FreeKick Naija, Mr. Kakunguwo expressed interest in becoming the next FIFA President. He put in his name for the position after the March 2015 announcement that the Zimbabwe Football Association (ZIPA) was expelled from the preliminary FIFA World Cup to be held in Russia in 2018 due to mismanagement of funds and failure to pay outstanding debts. Recognizing that running a campaign would cost considerable funds that he did not have, Mr. Kakunguwo withdrew his name for consideration to focus on his football academy.

In October 2015 Mr. Kakunguwo traveled to Queensdale School in Harare to officially launch his academy, The Zimbabwe Football Development Academy-Centre of Football Excellence and to assist with the Zimbabwe Football Youth Awards (ZFYA) which were held for the first in Zimbabwe in 2015. During the ZFYA eleven matches were played by 13 to 17 year olds. Players were awarded training equipment, jerseys, cones, and balls. At ZFYA, Mr. Kakunguwo gave out medals for the Most Valuable Player and other distinctions with the help of Rudo Neshamba, Zimbabwe’s National Women’s Mighty Warriors’ team member and outstanding striker, who also serves as his Football Academy’s Ambassador.

Although only recently officially launched Mr. Kakunguwo’s Football Development Academy has been growing since 2014 and now has over 100 coaches and 500 players at numerous centers across Zimbabwe. In an effort to brand Zimbabwean football, Mr. Kakunguwo created what he calls ‘iTouch,’ a form of football that consists of control, passing, possession, strong defending, and unpredictable counterattacks, inspired by the Spanish Tiki taka type of football.

Based on the literature on international development and personal success, why has Mr. Morris Kakunguwo been so successful in his undertakings?

Mr. Kakunguwo did not give up. He remained optimistic and pursued his dreams. When an injury ruined his chances to be a football player he came up with an alternative plan to remain involved with the sport and ways to contribute to it.

Mr. Kakunguwo understands what it is like to be a youngster in need of assistance from others. He is GIVING BACK through his Football Academy just as his brothers gave him support when he needed it. Mr. Kakunguwo would like his Academy to be a ‘beacon of hope’ for talented youths facing difficult situations that might otherwise be overlooked by club coaches. The football coaches not only teach about the sport but also serve as mentors and promote general health by making the youths aware of the dangers of HIV/AIDS, drug misuse, and teenage pregnancies.