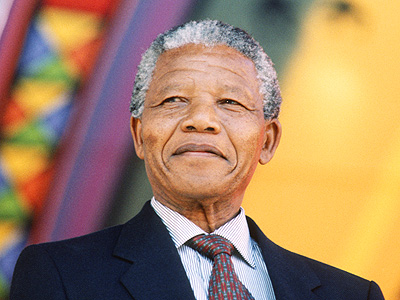 BONUS POST: I have featured many Mandela Washington Fellows on this site, but not their namesake. This post is long overdue.

Nelson Rolihlahla “Madiba” Mandela was born on July 18, 1918 in Mthatha (formerly Umtata) in the Union of South Africa. Initially he grew up with his two sisters. When his father passed away when he was around nine years old, Nelson’s mother brought him to live with Chief Jongintaba, of the Thembu people in Mqhekezweni, who served as his guardian. Nelson attended Clarkebury Methodist High School, before beginning a Bachelor of Arts (BA) degree at the University of Fort Hare. Mr. Mandela became involved in a Students’ Representative Council boycott against the quality of food, for which he was temporarily suspended from the university after his first year and he left without receiving a degree.

Mr. Mandela moved to Johannesburg and enrolled in a correspondence course at the University of South Africa to continue working on his BA, which he completed in early 1943. Thereafter, Mr. Mandela began to study Law at the University of Witwatersrand and, in 1944, having become increasingly involved in politics, became an executive committee member of the newly founded African National Congress Youth League (ANCYL). By 1947, Mr. Mandela was elected to the executive committee of the Transvaal ANC.

In 1948, general elections were held, but only whites were able to vote. A new openly racist National Party was formed that expanded racial segregation through formal apartheid legislation. Mr. Mandela became increasingly involved in direct action against apartheid including strikes and boycotts and was elected national president of the ANCYL.

In August 1953, Mr. Mandela and his friend Oliver Tambo opened Mandela and Tambo, in Johannesburg, then the only African-run law firm in the country. After numerous actions were taken against him to restrict his freedom of movement and speech and the demolition of an all-black suburb of Johannesburg in February 1955, Mr. Mandela began to believe that peaceful protests might have their limitations and that armed violent resistance might be necessary to gain equal rights. Resistance involved bombing military installations, telephone lines, power plants, and transport links. These activities were undertaken at night so that civilians would not be present and lives would not be lost. By 1960, the ANC was banned and Mr. Mandela had been arrested on more than one occasion for activities related to demanding his and others’ civil rights.

By 1962, Mr. Mandela was traveling the continent, meeting with African heads of state in Ethiopia, Egypt, Tunisia, Morocco, Mali, Guinea, Senegal, Liberia, and Sierra Leone to obtain support and funding to help bring majority rule to South Africa. When Mr. Mandela returned to South Africa he was imprisoned on charges of sabotage and conspiracy to violently overthrow the government. Mr. Mandela admitted to supporting sabotage to make his political views known and was sentenced to life in prison on June 12, 1964.

Mr. Mandela was sent to a prison on Robben Island, where he remained until 1982. Although Mr. Mandela was able to receive more visitors and letters in prison by the mid-1970s, throughout his entire time at Robben Island he had to engage in hard labor, sleep on a straw mat, and be confined for notable portions of each day to a small concrete cell.

After 18 years of imprisonment on Robben Island, Mr. Mandela was transferred to Pollsmoor Prison in Cape Town, where he remained until 1988. It is believed that he was transferred because he was having too much influence on the prisoners at Robben Island. Nonetheless at Pollsmoor, Mr. Mandela’s popularity only continued to rise to the point of the UK’s head of state, Margaret Thatcher, requesting that he be released. Mandela turned 70 years old in Pollsmoor Prison and a few months later was transferred to Victor Verster Prison where he was housed in relative comfort from December 1988 until February 11, 1990. While at Victor Verster Prison, Mr. Mandela completed his Law Degree.

Upon his release from prison, Mr. Mandela toured Europe, Asia and the Americas, meeting with heads of state and encouraging them to support economic sanctions against South Africa until there were free and fair elections in which all people in his country could participate. In 1993, US President Bill Clinton awarded Mr. Mandela the Liberty Medal. Soon thereafter Mr. Mandela was awarded the Nobel Peace Prize (jointly with South Africa’s President F.W. de Klerk, who had agreed to hold free and fair general elections in 1994, and in which the ANC would win 62 percent of the vote).

Nelson Mandela was inaugurated as South Africa’s President on May 10, 1994. Although he was now President, Mandela lived simply and donated one third of his annual income to the Nelson Mandela Children’s Fund, which he had founded in 1995. In December 1994, Mandela published his autobiography, Long Walk to Freedom, which was based on a manuscript he had written while in prison and which was made into a major motion picture.

By 1995 President Mandela had entered a relationship with Graca Machel, former first lady of Mozambique and a former freedom fighter for that country’s liberation from Portuguese colonial rule. President Mandela sought to have an inclusive South Africa and one based on forgiveness. He oversaw the formation of a Truth and Reconciliation Commission to investigate crimes committed under apartheid by both the government and the ANC, as a means of national healing and he appointed Desmond Tutu, a great advocate of forgiveness, as its chair.

Many advances in social justice were made during Nelson Mandela’s presidency. Free healthcare was introduced for children under six and pregnant women, millions of people were given access to clean water, housing, electricity, and phone lines, and brought into the formal education system. Five hundred health clinics were constructed or upgraded and property rights were restored to tens of thousands of people who had lost them due to the racial discrimination practiced by previous regimes.

In 1999, President Mandela retired and established the Nelson Mandela Foundation which for its first five years focused on rural development, school construction, and combating HIV/AIDS, but which grew into an organization that preserves Mandela’s memory and his work. In 2003, Rhodes House of the University of Oxford created the Mandela Rhodes Foundation to recognize Mandela’s great work and provide postgraduate scholarships to African students.

In 2007, although retired and 89 years old, former President Mandela helped create a new group of world leaders interested in peace and human rights called The Elders. The Elders contribute their wisdom to some of the world’s toughest problems, from poverty, to climate change and HIV/AIDS. Former President Mandela died on 5 December 2013 at the age of 95. His death was mourned worldwide.

Based on the literature on international development and personal success, why was Nelson Mandela so successful?

Mr. Mandela did not view the liberation of his people in isolation. Like Ghana’s PAN-AFRICANIST Kwame Nkrumah, he viewed the oppression of people anywhere as problematic and as needing to be addressed.

Mr. Mandela believed in the POWER of FORGIVENESS for moving forward, healing, and nation-building. Due to this mindset he is widely viewed “the father of the nation” and “the founding father of democracy” within South Africa. He has been likened to other great leaders including Abraham Lincoln and Mahatma Gandhi. His life has been celebrated on film, in song, through commemorative statues, and in 2009 the United Nations naming July 18th as a day in his honor.

His strong desire and efforts toward PEACE and HUMAN RIGHTS in the world earned former President Mandela a US Presidential Medal of Freedom, appointment to the Order of Canada, an honorary Canadian citizenship, the Soviet Union’s Lenin Peace Prize, Libya’s Al-Gaddafi International Prize for Human Rights, India’s Bharat Ratna, and Pakistan’s Nishan-e-Pakistan. Queen Elizabeth II appointed Nelson Mandela as a Bailiff Grand Cross of the Order of St. John and granted him membership in the Order of Merit.

Nelson Mandela is considered one of the most important world leaders ever. He is greatly missed.