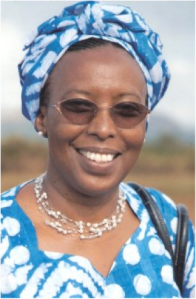 Marguerite Barankitse, better known as Maggy, was born in Ruyigi, Burundi. She lost her father at a very young age and grew up with her mother, brother, and in the close company of her grandparents and uncles. Her mother adopted eight children, demonstrating the importance of loving one’s neighbors and inspiring Maggy to devote her life to helping children.

After studying in her home country to be a teacher, Ms. Barankitse completed three years of seminary studies in Lourdes, France before returning to Burundi to teach French at the secondary school in her hometown. During this time, Ms. Barankitse, who was only 23 years old, informally adopted one of her students, Chloé, a girl from a different ethnic background and religion, who had been orphaned.

In the late 1980s, Ms. Barankitse returned to Europe to study administration in Switzerland. She accepted a post in a diocese in Ruyigi only to experience having the diocese’s main building burned to the ground in late 1993 as a result of the unrest and ethnic killings going on there and, not long after, in neighboring Rwanda.

Ms. Barankitse was distressed that brothers and sisters were killing each other and determined to do something about the situation. She found refuge in the home of Mr. Martin, a German humanitarian worker in Ruyigi. They opened the doors to an ever growing number of orphaned children fleeing the violence and Ms. Barankitse gave a name to the buildings being used as a safe haven, Maison Shalom, the house of peace.

Initially Maison Shalom offered places to shelter, including in some of the remaining buildings of Ms. Barankitse’s diocese, but by the late 1990s, services were expanding to include reintegration efforts, or the return of children to family members from whom they had been separated. Neighbors were also approached to take in children who would eventually inherit nearby lands.

In 1999, thanks to the support of Caritas Germany and UNICEF, Maison Shalom was able to return 121 children to their families or communities. Maison Shalom’s program of reintegration expanded in 2000, after the signing of peace accords. In 2002, Maison Shalom officially became a not-for-profit organization. In time, more than 20,000 young people were assisted by Maison Shalom. Buildings were added and Maison Shalom grew into a village in its own right with a hospital, recreation center, farm, school, housing, and an income-generating guesthouse.

Maison Shalom is changing not only the lives of the orphans, but an entire community that now benefits from access to additional services. The organization has assisted children to understand their legal rights, and in some cases to be released from potentially long prison sentences for minor infractions, such as stealing a pair of pants. In the present day, the majority of those who work at Maison Shalom were once children seeking refuge there. The Maison Shalom farm alone employs 20 permanent and 300 seasonal workers, including some former patients from the Maison Shalom hospital. Others work in carpentry, masonry, auto-mechanics and other fields for which Maison Shalom provided them with training.

In mid-2015, over 105,000 Burundians fled to neighboring Rwanda, Tanzania, and the Democratic Republic of the Congo, amid fear of violence associated with President Pierre Nkurunziza run for what was widely considered an unconstitutional third term. The opposition boycotted the elections and President Nkurunziza easily won reelection. As a result of the mass movement of Burundians, and death threats against Maggy, in late October 2015, Maison Shalom opened an international office in Rwanda and Ms. Barankitse went into hiding. The Rwanda branch is an officially recognized NGO in Rwanda and supports Burundian refugees as well as Rwandans in need. In late October 2015, there were approximately 45,350 refugees from Burundi in Rwanda. The majority of them are at Mahama camp where Maison Shalom will concentrate its efforts.

Ms. Barankitse has been recognized for her excellent work with a medal from the Government of France in December 1998 to mark the 50th anniversary of the Universal Declaration of Human Rights; to date, only ten people have received this distinction, including the Dalia Lama. She has also received: a Trophy of Courage from Afrique International (2000), a North-South Prize from the Council of Europe (2001), a World’s Children’s Prize for the Rights of the Child (2003), Four Freedoms Award from the Roosevelt Institute (2004), an Honorary Doctorate, Louvain-la-Neuve University, Belgium (2004), a Nansen Refugee Award from the United Nations High Commissioner for Refugees (2005), a certificate of merit from the President of Burundi for services rendered to the nation (2007), UNICEF prize award (2008), Guardian Achievements in International Development award (2009), Médaille de chevalier de la légion d’honneur, France (2009), Chirac Foundation Prize for the Prevention of Conflicts (2011), an Honorary Doctorate from Catholic University Lille, France (2011), a Colomba d’oro per la pace (Golden Dove of Peace) from Archivio Disarmo, Italy (2011) and the Segal Family Foundation’s Angel of Africa award (2013).

Based on the literature on international development and personal success, why has Dr. Maggie Barankitse and Maison Shalom been so successful?

Dr. Barankitse took a HOLISTIC APPROACH to assisting orphaned children. She BUILT ON THE STRENGTHS of existing communities and helped to develop them. She offered children pathways to success through training, not handouts.

As Maison Shalom grew, it no longer waited for orphans to find them, but reached out and found children in need of support.