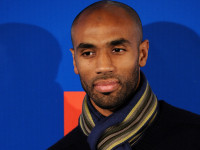 Frédéric “Freddy” Kanouté was born near Lyon, France in 1977 to a French mother and a Malian father. He started his football career with Olympique Lyonnais at the age of 20. He then went on to play in England for five years, Spain for seven, and finished his career in China in 2013. In his Spanish career, he became one of the Sevilla club’s highest-scoring foreign player, and is considered one of the best strikers in football history.

Kanouté converted to Islam around the same time he started his football career, and his dedication to his faith can be seen in his putting $700,000 into saving a mosque in Seville, Spain, preventing it from being closed. He financially assisted a handicapped Muslim man who needed extra care to facilitate his fasting for Ramadan in 2013. He refused to wear a jersey that advertised a gambling company for religious reasons. Similarly, he stirred controversy by revealing that under his jersey he wore a t-shirt supporting Palestine in 2009; he was later fined for this act.

Kanouté started his charitable foundation in 2006. The Fondation Kanouté built its flagship project, the Sakina Children’s Village for orphans that provides a family environment for children in 2010. The village brings together various services, including healthcare and education, and includes a job training center to develop professional skills. Kanouté is particularly dedicated to helping orphans in his father’s homeland, Mali, because his father was orphaned as a small child.

The foundation’s more general mission is to fight poverty by increasing employment, job training and opportunities in Mali and elsewhere. In particular, the foundation has adopted a “teach a man to fish” approach to providing aid to families by donating livestock, such as chickens to provide meat and eggs, and goats to provide milk.

In 2012, Kanouté and several other Sevilla players organized the Champions for Africa football annual game. Proceeds from ticket sales went to UNICEF and Kanouté’s foundation. Today, he continues to support youth involvement in football, as he started the KAFO Academy in his new home, Dubai.

Based on the literature on international development and personal success, why has Frédéric Kanouté (and his non-profit organizations) been so successful?

In an interview with the Association of Muslim Footballers, Kanouté stated that he disliked that money can change people in the sports world. Instead of spending his money extravagantly or irresponsibly, Kanouté CONTRIBUTED his earnings to CHARITABLE CAUSES both in Mali and in Europe.

Kanouté’s foundation FOCUSES ON THE FUTURE, not just short-term goals. The foundation TRIES NOT TO DUPLICATE WORK ALREADY BEING DONE in Mali, such as emergency relief; instead it focuses on targeted goals such as job opportunity development and skills training.

*Justine Maisha Davis is a Ph.D. student in Political Science at the University of California-Berkeley in the USA. She earned her Master’s Degree in International Affairs, Conflict Resolution and Civil Society Development at the American University in Paris and her Bachelor’s Degree in International Studies (Africa Concentration) from Elon University in North Carolina in the USA. She has lived and worked in the USA and France on several Africa-focused initiatives and served as a Special Advisor in the Ministry of National Education in Côte d’Ivoire as a Fulbright-Clinton Fellow.